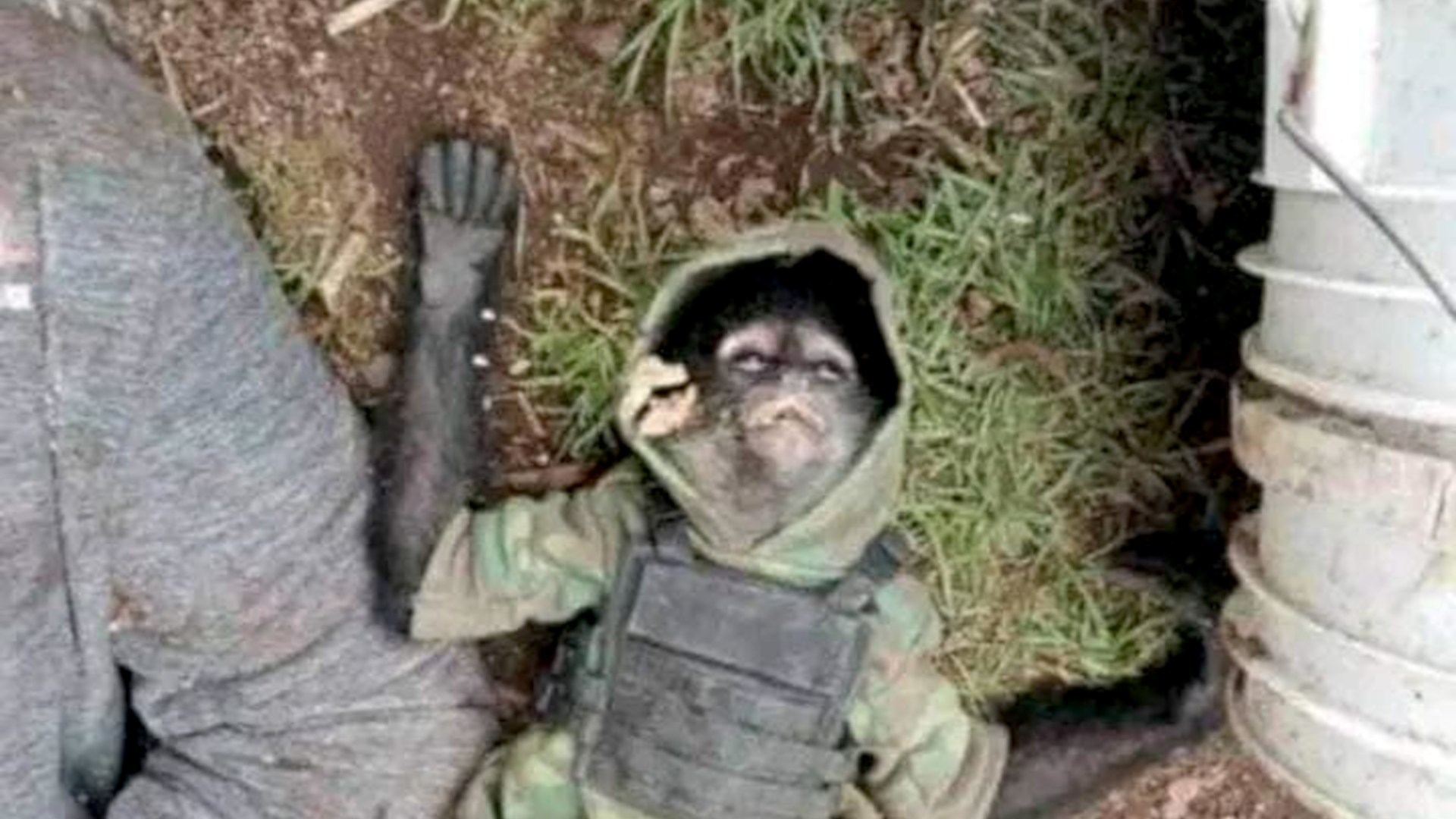 THE pet monkey of a drug gang member – dressed up in a bulletproof vest and camouflaged jacket – has been killed in a bloody shootout which also left 11 other cartel members dead.

Its owner – a young man in his 20s said to be in Mexico‘s notorious La Familia Michoacana criminal group – was found dead from several gunshot wounds with the monkey lying on his chest.

Stunned police came across the bizarre and gruesome scene following a firefight between authorities and cartel members in the town of Texcaltitlan, central Mexico, just over 60 miles southwest of the capital, Mexico City.

The small spider monkey was found with his arms outstretched as if holding his owner, who was carrying him by the shoulders.

He was wearing a bulletproof vest, a khaki hooded jacket, and a nappy.

Mexico Daily Post reports that 10 men were killed at the scene while another died in hospital and a further 10 were detained.

Three of them remain under medical observation after being injured in the gunfight.

Infobae reports that five of those detained are men and three are women, while another is a minor under 15 years of age.

Another adult was also hospitalised, but no details have been given about them.

Pictures of the “narco monkey” went viral online, with many social media users assuming at first that they were fake.

However, police have now confirmed that the pictures are genuine.

The monkey’s owner was reportedly part of the regional leader of La Familia Michoacana’s security team – whose head was called ‘El Gorilla – and who fled during the police raid on Tuesday, June 14.

Authorities seized various weapons including 20 assault rifles, handguns, ammunition and vehicles in the operation, and also took the body of the monkey away.

It will undergo a necropsy under the charge of specialist vets from the Faculty of Veterinary Medicine and Zootechnics of the Autonomous University of the State of Mexico (UAEMex), according to the paper.

In addition, authorities will investigate the likelihood that the spider monkey – a protected species – was illicitly trafficked by the drug gang.

On the same day as the shooting, a Bengal Tiger was spotted walking the streets of Tecuala in the western Mexican region of Nayarit.

It was reported on social media that the tiger had escaped from the house of its owner – who is involved in organised crime.

The man later came to collect his dangerous pet with a chain.

Mexican animal rights group Animal Lawyers warns that organised criminals often mistreat the exotic pets that they keep, many of whom are unable to adapt to the new habitat they find themselves in.

Tuesday’s bloody raid involved dozens of heavily armed police as well as troops from the army, the navy and the National Guard.

It comes just weeks after a similar bloody shootout in the central Mexican region saw agents from the Prosecutor’s Office and state police came under fire by 20 trucks of armed men.

Mexico’s president Andres Manuel Lopez Obrador has spoken out in the wake of the shooting, insisting that he would continue with his security strategy of “not facing violence with more violence”.