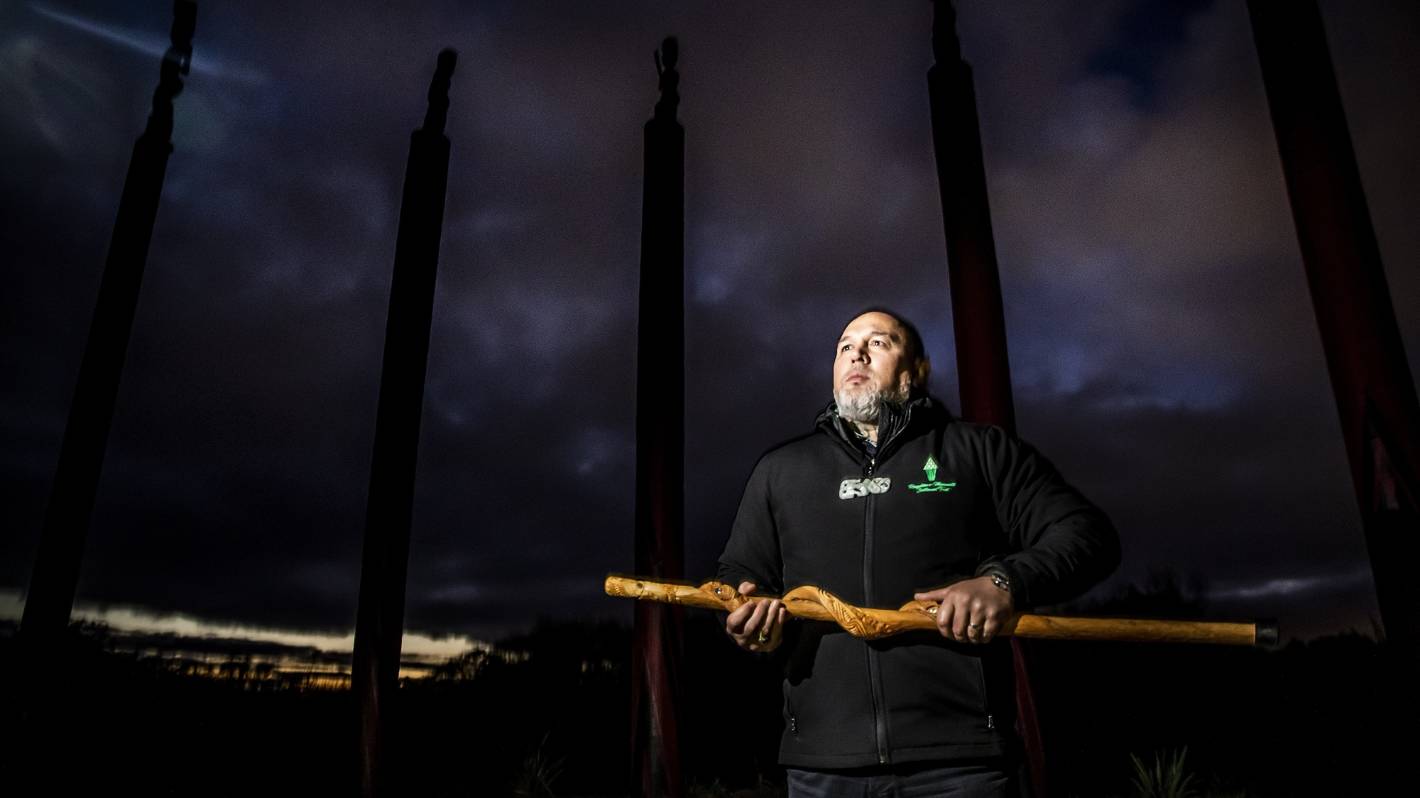 Rangitāne iwi representative Louis Te Mete looks to the stars as he talks about Matariki and Puanga. Te Mete holds a tokotoko that was passed down to him from his father. Craig Kawana carved the tokotoko as well as the pou at Ahimate Pa.

Known for its rolling Tararua and Ruahine ranges, Manawatū’s location near the west coast of Aotearoa’s North Island can make viewing Matariki’s rise a challenge.

For local iwi Rangitāne their gaze is guided towards the whetū (star) Puanga as a sign the Māori New Year is almost here.

The pulsating blue star is easier to see above the rohe, appearing higher and brighter than the other stars in the Matariki cluster.

Ngāti Hineaute hapū spokesperson Louis Te Mete said Puanga was also known as the star Rigel in the Orion constellation, and was principally observed by Rangitāne during Matariki as it was easier to locate in the sky.

“Once located, you can then look towards the left to find the Matariki constellation.”

Matariki stargazers in different parts of Aotearoa may be forgiven for some confusion.

While all refer to Matariki as the Māori New Year, some iwi, like Rangitāne, use a different star to mark the occasion such as Rehua, the father of the stars, or Atutahi.

Te Mete said Puanga was considered the older sibling of Matariki, the mother of the other whetūs in the constellation, and it meant an ‘abundance of food’.

Some believed its presence marked the calling in of the new year, while Matariki signified it’s beginning.

Te Mete said Rangitāne saw Puanga as the tohu (sign) for the Māori New Year, and it held a place in the lore of tangata whenua.

“For Rangitāne, Puanga is the exclusive pillar that propped up Ranginui’s (Sky Father) sacred head.

“Puanga assisted Tāne’s ascent into the heavens to retrieve the three sacred baskets of knowledge and was used as a guiding light, sometimes pulsating blue at different times.”

Ngāti Hineaute hapū authority chairman Chris Whaiapu said Puanga was seen by Rangitāne as the depository of the spirits of loved ones, or as the realm of eternal existence.

Astronomer Dr Rangi Matamua of Ngāi Tūhoe said he wanted people to find out how the environment in their region worked with the stars and lunar phases.

“At the end of the day it is the choice of each individual tribe or community as to what symbols and ecological events they chose to follow.

“These choices are relevant to their unique surroundings. I encourage people to embrace the korero from where they are.”

Matamua said Matariki was a time to spend together and acknowledge what had happened in the previous year.

“But also to celebrate everything present that is wonderful.”

To welcome in the Māori New Year, Rangitāne hapu Ngāti Hineaute had joined with the Palmerston North City Council to host the star-studded Puanga Twilight Festival.

The event features a line-up of kapa haka and musical performances, food and retail stalls, storytelling and a fireworks display.

It would be held along from the Albert St entrance to the Manawatū River at Ahimate Park, an ancestral pa site of Rangitāne.

Council head of events Luke McIndoe said the festival provided a fun and educational atmosphere for everyone and allowed the community to come together and share kai, and learn more about Puanga and its significance.

Educator Hauiti Gardiner shows you how to find the Matariki star cluster during the Māori New Year, which falls in the month of Pipiri (June–July).

Amba Holly, a Wellington-based award-winning performer was chosen as the festival’s headline event.

McIndoe said music, storytelling and kapa haka performances would not be the only kind of entertainment.

“People will be able to browse a range of food stalls, sampling some hāngī and fried bread along the way. We’ll also have a selection of retail and wellbeing stalls for people to check out, and tamariki will have a designated area where they can play mini-golf or keep busy with UV painting and colouring-in activities.”

Puanga Festival is at Ahimate Reserve, Friday from 4.30pm – 9pm.