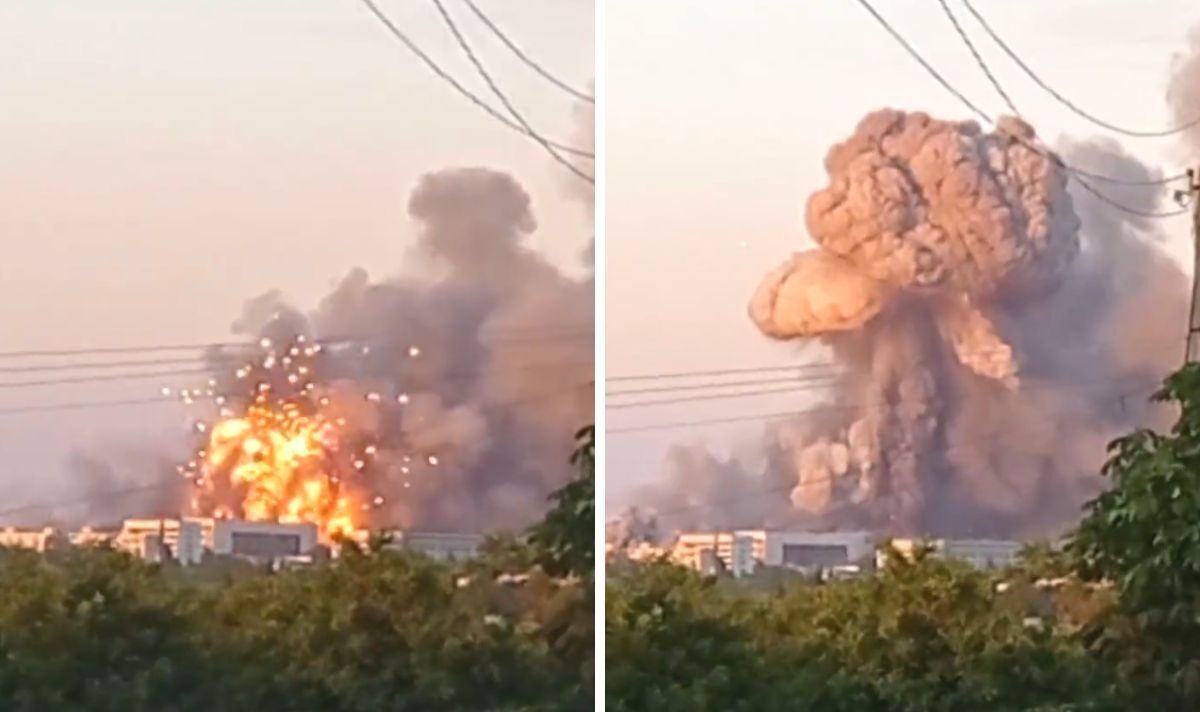 Shocking video footage from Russian-occupied territory in Ukraine has captured multiple fiery explosions within a military storage facility. The clip shows an ammunition warehouse in Khrustalnyi, a city in the Luhansk region of southeast Ukraine that is currently under the control of the Kremlin’s military forces. The building erupts in a series of huge explosions in which sparks can be seen flying from the warehouse as an enormous cloud of thick black smoke billows into the sky above. The destruction of Russian military supplies is anticipated to be a devastating blow for President Putin amid evidence Moscow’s troops were already struggling to sustain the essential artillery needed to pursue the invasion.

A caption accompanying the video added: “Something very accurate and long-range arrived.”

The description appears to indicate that the ammunition warehouse has been destroyed following a successful defensive missile launch by Ukrainian forces.

The Ukrainian military has been strengthened by the arrival of long-range artillery weapons from European allies, including the UK’s pledge to provide multiple-launch rocket systems.

In a statement from the 6th June, the UK Ministry of Defence confirmed the UK would “gift” advanced rocket launch systems to Ukraine in response to the ongoing Russian invasion.

The technology has been described as “cutting edge” with the ability to strike targets up to 80km away with “pinpoint accuracy.”

Defence Secretary Ben Wallace added: “As Russia’s tactics change, so must our support to Ukraine.

“These highly capable multiple-launch rocket systems will enable our Ukrainian friends to better protect themselves against the brutal use of long-range artillery, which Putin’s forces have used indiscriminately to flatten cities.”

As the Ukrainian military continues to be bolstered by provisions from international allies, intelligence reports suggest Moscow is struggling to sustain the initial levels of military strength observed in the early weeks of the invasion.

Despite a Kremlin pledge to increase defence spending in order to facilitate the ongoing war, Russia is unlikely to be able to produce and transport enough equipment to adequately replace the technology which has already been destroyed in combat.

An intelligence update from the UK Ministry of Defence said: “Russian government funding is allowing the country’s defence industrial base to be slowly mobilised to meet demands placed on it by the war in Ukraine.”

“However, the industry could struggle to meet many of these requirements, partially due to the effects of sanctions and lack of expertise.

“Russia’s production of high-quality optics and advanced electronics likely remain troubled and could undermine its efforts to replace equipment lost in Ukraine.”

President Putin’s invasion has entered a pivotal stage as the huge loss of Russian soldiers has created a severe lack of combat-trained personnel to continue fighting in the war.

An intelligence statement issued on Thursday from the Ministry of Defence said: “Russia’s combat force in the Donbas is highly likely operating in increasingly ad hoc and severely undermanned groupings.

“As claimed by the Ukrainian authorities, some Russian Battalion Tactical Groups (BTGs) – typically established at around 600 to 800 personnel – have been able to muster as few as 30 soldiers.”

The lack of military forces available to the Kremlin has contributed to “its continued slow rate of advance” as Putin has concentrated invasion efforts on the Donbas region bordering Russia.